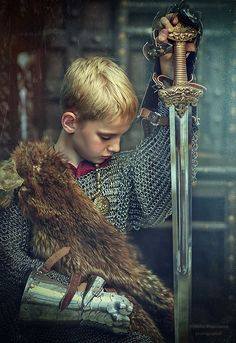 A young boy of royal blood. The true king. The throne is rightly his when he comes of age.

He does not live in the castle. He lives among the people. A common mother raises him.

The throne is his, and not yet his.

The kingdom is his, and not yet his.

He is king, and not yet king.

Until then, an evil regent rules. A strong, evil man in the castle.

The regent knows the boy’s time has come, so he attempts a deal with the boy: “I will let you rule the kingdom if you serve me.”

The boy refuses. He must obey his father.

The young boy travels throughout his coming kingdom, announcing the imminent regime change. He gathers friends, and trains them as his future governers.

The king is coming. And the king is already here.

Those who knew his father… squint. They recognize him. He sounds like the one they already know.

Some kneel before the king before he is yet throned.

Soldiers of the evil regent recognize him as well. But they are terrified. The young boy commands them to be quiet, and to go away. They flee for their lives.

When he walks into a town, it changes. Massive numbers of livestock are found dead. Insane men are found sane. Blind men seeing with their eyes.

Wherever he goes people say, “He was here.”

The power of his words is befitting of a king. He speaks with authority.

Wherever the young boy travels, people get a taste of the new kingdom. It is arriving. It has already arrived.

Those familiar with the Old Kingdom are confused by the coming king’s posse. They do not use standard goblets. They feast as though with a king, as though already at his coronation feast.

The boy’s time has arrived. He takes his final trip to the town of the castle. He arrives, and other young boys and girl shout for joy.

The boy approaches the castle. But he takes off all his armor. He lays down his sword. His friends are confused.

None of them, not even his closest friends, are brave enough to enter the castle with him. He enters alone.

And as he enters, the sky becomes dark. The ground shakes. His friends can hear him inside: he screams the screams of death. His mother runs out of this castle, weeping. Her boy is dead.

Days later, his friends are dejected and confused.

Then suddenly the sealed drawbridge of the castle is lowered, the portcullis raised. A young man exits the castle. He smiles. He calls his friends to himself.

He shows them his wounds. He says,

I have not yet put on my royal robe.
I will return with a white horse
And a sharp sword
And all will bend the knee

Until then, go. Tell them:

You are mine, and all is yours.

You will reign with me
Over all peoples, nations, and languages
And my kingdom will be an everlasting dominion
Never to be destroyed