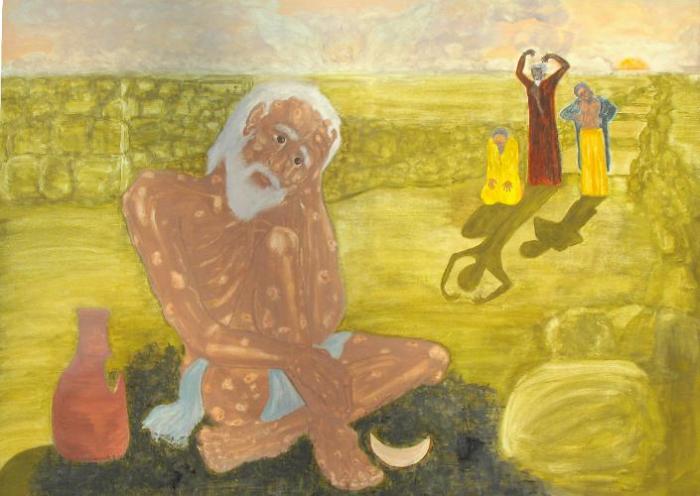 “If [Job] is a theodicy, it raises the question without providing the expected answer. God’s response is that the answer is beyond the ken of men and women. Perhaps a better designation of the genre of the book is ‘wisdom debate.’ (Longman & Dillard, 232)

All the interlocutors, with the possible exception of Elihu, are rebuked for their misunderstanding, and God establishes himself as the true source of wisdom.

“The central message of the book is implied in the hymn to wisdom (chapter 28). Wisdom belongs ultimately to God (vv. 20–28), and all human attempts to grasp it or contain it are doomed to failure.” (Arnold & Beyer, 296)

In Romans, Paul says, “But who are you, O man, to answer back to God?” (9:20) Paul reminds us that God is the potter, and we are the clay. Notably, he doesn’t provide an actual, direct answer to the question in view (how can God find fault if we can’t ultimately resist his will? v. 19). Similarly, Job himself is never given an answer for the reason for his suffering.

“While God chooses not to reveal the answer to this question to his human creatures, we still learn much from this book about suffering. For instance, if we do not learn why we suffer, the book does disabuse one common belief, the so-called doctrine of retribution.” (Longman & Dillard, 234)

Specifically, we learn that retribution is not necessarily an accurate or sufficient explanation for *all* suffering. While it is generally true that sin leads to suffering, not all suffering is due to sin. The God whose invisible hand is behind suffering is bigger than retribution. Neither is he smaller than retribution. As with the man born blind spoken of in John 9, the suffering in view may be designed by God to display his glory in a non-retributive manner.

For these reasons I think of the Book of Job providing comfort like I think of Ecclesiastes providing meaning. They both remind us that God is ultimate, but both set up inadequate answers to the problems they address. At the very least they help a person feel like they are not alone — there have been others, even those of ancient times, who have struggled with the same sense of meaninglessness and unfairness. But God is still good, and ultimate, and wise. And we can simply trust him for that. God is God, and we are not. Let us put our hand over out mouth and worship.

But that was not the end. We can now read the Book of Job now canonically, within the wider scope of a Christ-centered canon.

“The story of the relationship between God and human suffering does not end with the book of Job. Job teaches that God is in control; he reprimands the innocent sufferer for questioning his wisdom and power. Job appropriately responded with repentance.

“The New Testament brings us to a deeper understanding of God’s dealings with suffering. In Jesus Christ he reveals his love toward his sinful creatures by sending his Son to die on the cross. Jesus Christ is the true innocent sufferer, the only one completely without sin. He voluntarily (as opposed to Job) submits himself to suffering for the benefit of sinful men and women. As Andersen (1976, 73) states it, “That the Lord himself has embraced and absorbed the undeserved consequences of evil is the final answer to Job and all the Jobs of humanity.” In Jesus, God enters into the world of human suffering in order to redeem humanity. Jesus experienced the height of human suffering on the cross, and he did so without complaining. The early Christian community saw the connection between Job and Jesus, so it was a common practice to read the book of Job during Passion week (Delitzsch 1975, 32).

“Jesus’ death on the cross did not bring suffering to an end. Indeed, Christians are characterized by their sharing in the sufferings of the Lord. To say that Christians are removed from the evil and pain of the present world on the basis of their conversion is a perversion of the gospel. In 2 Corinthians 1:3–11 Paul likens the suffering of Christians to that of Christ in order to communicate the comfort that is also available from Christ. It is interesting that he goes on to describe the Christian community as a fellowship of suffering and comfort.

“Thus the book of Job retains its power for contemporary Christians. It can now, however, be properly read only in the light of the suffering of the totally innocent sufferer, Jesus Christ.”